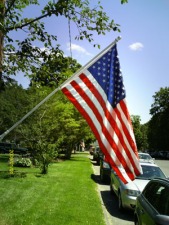 Voting is both a privilege and a civic responsibility. You must register to vote here in Town if you want to participate fully in the public issues facing Washington and elect the officials who will decide them.

The Washington Democratic Town Committee (WDTC) offers the following voter guide, complete with useful computer links, so that you easily take every step in the process.

Voting is a privilege and a responsibility. To participate fully in the public issues facing Washington and elect the officials who will decide them, you must register to vote here in Town. Then, you must remember to vote on the first Tuesday in November.

Of course, the WDTC believes that the best way to do so is as a registered Democrat. We have prepared a guide to registering and voting, which will get you started down the road to civic engagement here in Town. 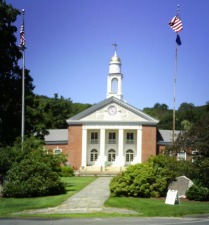 In general elections (for municipal, state, and national offices), the Town of Washington has just one polling place for all of its five villages—that is, Washington Depot, Washington Green, New Preston, Woodville, and Marbledale. It is in Bryan Memorial Town Hall, which is located on Bryan Plaza, across the parking lot from the Washington Food Market. The telephone number of the Town Clerk’s office in Town Hall is: (860) 868-2786.

Voting also occurs at Town Hall during Town Meetings. Washington is among the small number of Connecticut towns that are governed by town meetings, where Washington taxpayers form the Town’s legislative body. At these Town Hall meetings, many key issues are debated and voted on, such as adoption of new Town ordinances; amendments to existing ones; and special funding appropriations for items not included in the budget. Town Meetings are announced in Voices, the local twice-weekly newspaper, at least five days beforehand.

Voting on various Town referendums also occurs in Town Hall on issues such as the adoption of a proposed Region 12 school budget.

Voting at Democratic Party caucuses is often held in Town Hall. If a different location is chosen, it will be announced in advance in Voices.

In General Elections To vote here in an election (for municipal, state or national office), you must be registered to vote in the Town of Washington. To vote as a Democrat in a primary or election, you must register at least two weeks before Election Day.

To register you must:

On Election Day, voters will be asked to provide a photo I.D. to confirm their identity. A driver’s license with photo on it will suffice. If a valid license is unavailable, voters can fill in a form that will be given to them at the check-in desk at Town Hall. A United State passport or Social Security card may be substituted for a driver’s license.

To vote at a referendum, one must be either (1) registered to vote in the Town of Washington or (2) a United States citizen, who is at least 18 years old, and owns property in Town assessed at $1,000 or more in the most recent grand tax assessment list (Grand List). One may be a registered voter elsewhere but still vote at a referendum if one owns the necessary level of property here. One may also apply for an absentee ballot, for a referendum. Referendums are announced in Voices, the local, twice-weekly newspaper.

Voters at referendums must provide the same form(s) of identification required at general elections (see above).

The qualifications for voting at Town Meetings are the same as for referendums (see above). Unlike referendums, however, there are no absentee ballots; one may only vote in person.

How to Register to Vote

Citizens can register to vote in the Town of Washington in one of four ways:

Complete a voter registration form and submit it to the Registrar of Voters fourteen days before the election. Proof of residence is required. Remember to notify the Registrar if you later change your name or move within the Town.

The Town of Washington uses an optical-scan ballot, which requires voters to complete paper ballots and scan them for verification and tabulation. The technology provides a paper trail for every vote.

Voters may also vote at the polls using the Vote-by-Phone system, which combines a telephone-fax interaction. Designed for the visually impaired, it may be used by any voter instead of the optical scanner.

For information about using either technology, view here.

Absentee ballots may be requested for any of the following reasons:

You must apply for an absentee ballot. Application forms are available at the Town Clerk’s office in Bryan Memorial Town Hall, Monday through Friday, from 8:30 AM through 4:30 PM (860-868-2786). You can also request forms by telephone from the office of the Connecticut Secretary of State (860-509-6200).

Forms can also be downloaded online from Secretary of State.

When using the mail for any part of the process, leave sufficient time before Election Day for the application to be received by you; the completed ballot to be mailed out by you; and the mailed ballot to be delivered to the Town Clerk no later than Election Day. For ballots being mailed overseas, express mail postage should be included with the application. Express mail postage should also be included if timing is an issue.